Cranksgiving is a food drive on two wheels. Part bike ride, part food drive, and part scavenger hunt. All you need is a bike, a bag, and a turkey!

Cranksgiving is an event that Barrie’s Ski and Sports puts on annually. ICCU is teaming up with Barrie’s and has donated $2500 to help with the purchase of turkeys. Their goal is to collect 1000 turkeys. Turkeys and/or monetary donations can be dropped off at any ICCU branch in Pocatello and Chubbuck, Barrie’s Ski and Sports or the Idaho Foodbank. On 11/17 at 10:00 am Barrie and all others who wish to participate will be riding their bikes from Barrie’s store to the Idaho Foodbank to deliver the remainder of the turkeys they have on hand. The turkeys will be counted and weighed then loaded up on the truck and taken directly to the fairgrounds to be handed out during the Thanksgiving Food box distribution starting at 12:30 pm 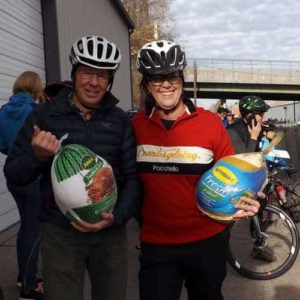