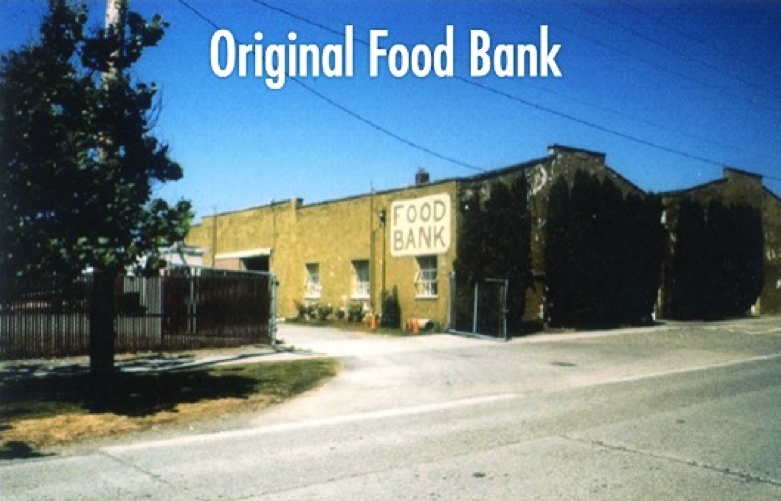 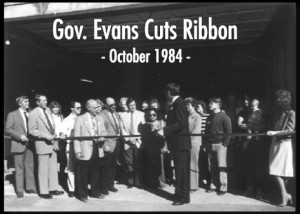 In 1984, Idaho Governor John Evans donated the space and cut the ribbon for The Idaho Foodbank Surplus Warehouse in Boise. It was just the beginning of an effort to work with other local organizations, retailers, food growers, processors and industry to help solve hunger in our state.

By 1985, things were up and running for The Idaho Foodbank, with distribution starting in Lewiston as well, run by volunteers and even recipients of the food. As distribution continued to grow and spread, the effort became a state-wide strategy to reach hard-to-reach and remote areas in Idaho.

By 1997, a need in the eastern part of the state had made itself clear, and an effort began to locate and run a warehouse for The Idaho Foodbank in Pocatello. That warehouse was opened in 1998, just 13 years after the first Foodbank warehouse, helping complete a three-tiered state strategy to reach partners and food banks in every part of the state in reasonable, safe and efficient time.

At the turn of the century, The Idaho Foodbank had grown to a distribution of more than 4 million pounds to more than 200 partners in Idaho. With the Pocatello and Lewiston Idaho Foodbank Warehouses running, an effort began to find a new location in Boise to act as a hub for the statewide effort. By the first day of 2001, The Idaho Foodbank moved into its current location on T.K Avenue in Boise. That year alone, volunteers donated more than 31,000 hours to help get the warehouse stocked, and ready to help Idaho families as quickly as possible.

A Boom in Demand

When the economy took a turn for the worse in 2009, The Idaho Foodbank had distributed a total of about 67 million pounds of food in its 25-year history. But as the recession took hold, more people had to turn to the Foodbank, leading to increased demand and need for efficiency in distribution to every region in the state. The Idaho Foodbank is the largest and most expansive emergency food distributor in Idaho. As food banking has changed to a focus on more perishable foods, the Foodbank has been able to process 94% of all donations to go directly to the programs and partners who help the people of Idaho find their way out of the situations that lead to food insecurity.

The Fresh Approach to hunger capacity expansion strategy is a reflection of the “can do” attitude of Idahoans. It is part of The Idaho Foodbank’s long-term plan to ensure that we can accept generous, largescale donations which will allow us to serve anyone with a need, regardless of where they live in our great state. This five-year plan to meet the fluctuating need for food assistance was an intentional goal to grow in order to help Idahoans today and in the future. This strategy included upgrades to our Pocatello facility, the building of a new facility in Lewiston, and now a focus on our main facility in Southwest Idaho.

In November 2016, The Idaho Foodbank celebrated the opening of its new North Central Idaho facility in Lewiston, which provides programs and/or services to the 9 northern-most counties in the state. 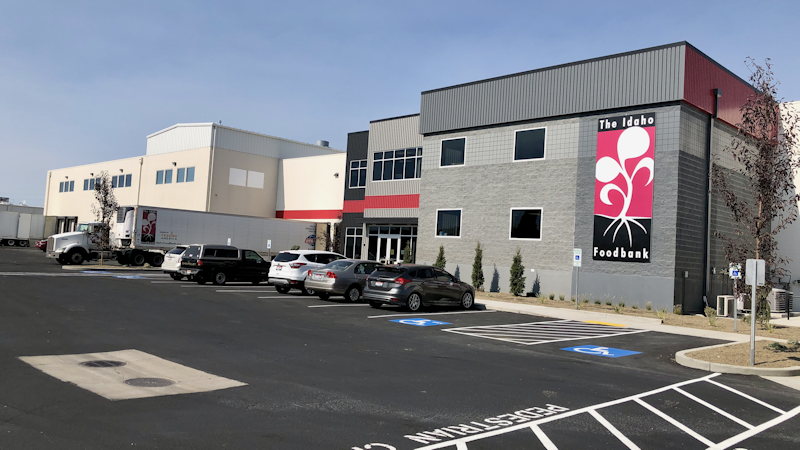 In the fall of 2020, the main facility in Boise was relocated to its new location in Meridian. Learn more about The Idaho Foodbank’s A Fresh Approach Capital Campaign.

The Idaho Foodbank’s facilities in Meridian, Lewiston and Pocatello have remained fully operational throughout the COVID-19 crisis. With the majority of our statewide network of 465+ community partners – schools, food pantries, senior centers, feeding sites, shelters, mobile pantries and churches – experiencing an increase in demand, the safety of our partners, volunteers, staff and neighbors were at the forefront of our action plan.

The Foodbank made quick changes to operations to distribute more food while assuring The Foodbank would remain operational. Throughout the challenge of COVID-19, we experienced how strong Idaho really is. The vast majority of our community partners continued to serve their local communities, volunteers filled each shift to move food through our facilities, community leaders took action, and our donors assured we could access and distribute the nutritious food people need.

We increased the amount of food we distribute across the state by more than 30%. We purchased historic amounts of food – spending over five times our annual budget so far. We transitioned to prepackaged food box distributions & drive-thru models. We stand ready for what the future may hold and committed to serving the people of Idaho now and throughout the recovery. 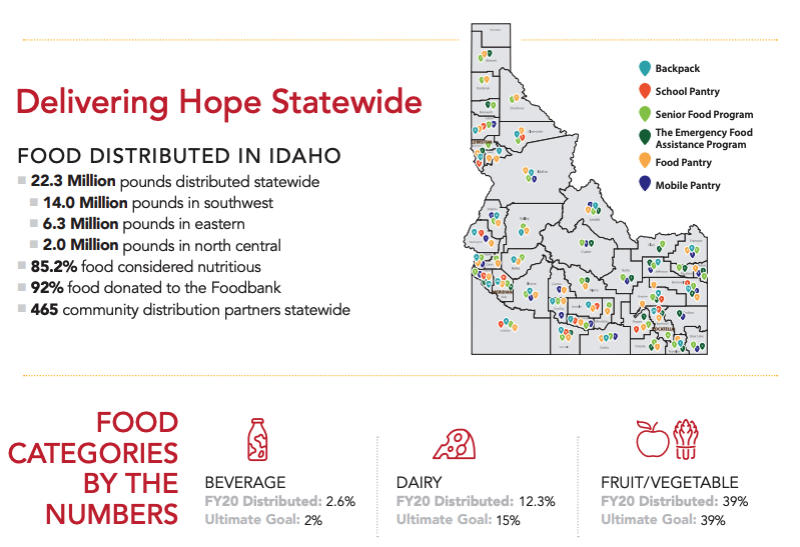