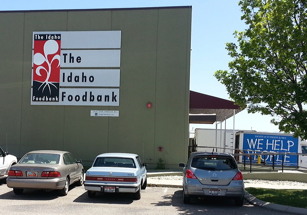 When you’re hungry and thinking about where you are getting that next meal, it can be hard to concentrate on getting other things done like getting a car running so you can go find work. We recently got a call from the Veteran’s Administration from one of the workers asking about getting food for one of their clients, wondering where to send him. Since some of the pantries weren’t open, we asked if he was able to get here and he said he could, probably within the hour.

Meanwhile, a young man came in to ask for food assistance. He had been here before, but not for well over a year. He said he had gotten laid off his job recently, and going through a rough time finding work. While we started to get him some current information, the referral from the VA came in. He had become disabled and was also going through a tough time.

Turns out that both men were veterans and when we were heading out to the warehouse they were talking with quite some animation about their common experiences. The next thing you know, they were exchanging phone numbers. The first veteran who had recently gotten laid off and was looking for work had a car, but it had a bad transmission. He said he could work on himself but he didn’t have some of the tools and jacks. The other veteran said he was pretty sure he had the tools he needed, and definitely had the jacks. They decided they were going to get together to work on it.