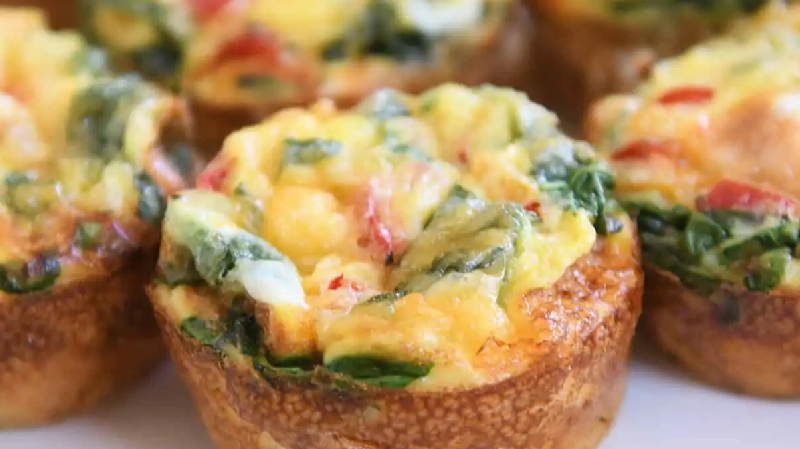 In a small bowl, toss the thawed hash browns with the butter, salt and pepper. Divide the hash brown mixture evenly among the muffin cups. Using lightly greased fingers or a 1/4-cup measuring cup, press the hash browns tightly and evenly into the bottom and up the sides to create a small nest or cup.

Bake the hash browns for 10-15 minutes until the edges are golden. Add time as needed (but take care not to burn).

Sprinkle a couple tablespoons of chopped bacon, bell peppers and spinach (or whatever add-ins you are using) evenly in the bottom of each baked hash brown cup.

Whisk together the eggs, milk, salt and pepper until well-combined. Pour the egg mixture evenly over the veggies in each cup. The cups can be filled up to 3/4 full without overflowing (the egg puffs tall but doesn’t spill over). Sprinkle cheese on top of the egg mixture.

Reduce the oven temperature to 375 degrees F. Bake the egg cups for 13-15 minutes until the eggs are baked through and set (not jiggly in the center). The eggs will puff quite a bit over the rim of the muffin tin then fall a bit as they cool.

Immediately out of the oven (or within the first couple of minutes), loosen around the edges of each muffin cup with a butter knife or rubber spatula and remove the egg muffins from the tin to a cooling rack or tray. Serve warm or at room temperature (or chilled!).