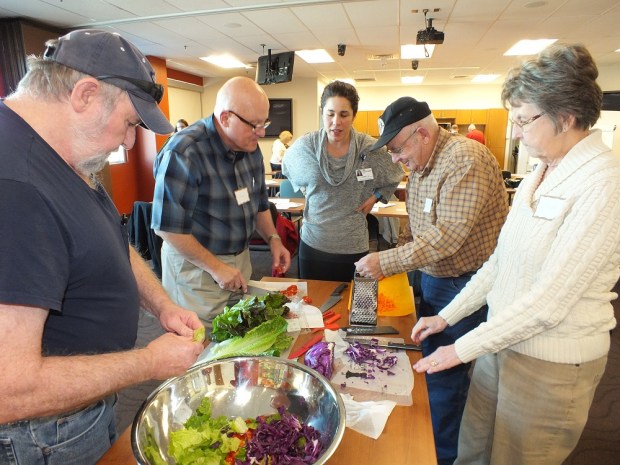 When LaDene woke up at 3 AM on August 7, 2015, a case of indigestion had set in. It was peculiar because she didn’t usually suffer from the ailment. So, she took some medicine to relieve the symptoms and headed out to sleep in the living room where she could ease her discomfort.

That rest didn’t last long. A little more than an hour later, LaDene woke to a much more serious illness.

“I had a really upset stomach and was hot and sweaty and clammy. I tried to get to the bathroom, but was laying on the floor,” LaDene said. “I called for my granddaughter to go get her Grandpa.”

Grandpa, LaDene’s husband, came to her side and called their son for help. LaDene asked for an ambulance. When that help arrived, she was diagnosed with a heart attack in progress. She was rushed to the hospital where doctors went to work to save her life.

“Next thing I know, I’m in a room feeling like a million dollars,” LaDene said.

That feeling didn’t come easy. LaDene had a stint put in her right coronary artery. She was told by her doctors that she needed some life changes if she wanted to survive.

“My family was concerned,” LaDene said. “I’m a strong part of my family. I immediately knew that because of my husband’s health and the other artery already having buildup, my health had to change.”

To change her health, LaDene signed up for a program at St. Luke’s in Meridian after a month of recuperation. Along with medical care and exercise, she was enrolled in a Cooking Matters class, a program through The Idaho Foodbank which teaches healthy ways to cook food at home. With a much more restrictive diet, LaDene said she embraced the class and the changes to her life.

“I really have always been a good cook,” LaDene said. “I cooked unhealthy things. I make the best pie crust you’d ever taste in your life. I knew the basics. But I had to get rid of sodium. I didn’t focus on calories and those things, but when I got sodium content down, it brought everything else down.”

It’s now been 7 months since LaDene suffered a heart attack. In that time, with the help of doctors and Cooking Matters, she’s lost 40 pounds and more than five inches off her waist. She’s down from a size 20 to a size 16.

“And those 16s are starting to feel really big,” she said.

“Yesterday, I threw away about half a ream of recipes because they don’t fit in my new lifestyle,” she boasted.

LaDene said Cooking Matters and its partnership with St. Luke’s was a literal lifesaver. Even at 76, she said it she thinks she’s just been re-birthed to a whole new life.

“It’s absolutely changed my life,” she said. “It was my third birth. My first was my mother, the second was my Lord. The third was a heart attack. It’s the difference between having a life at this point and having nothing.”