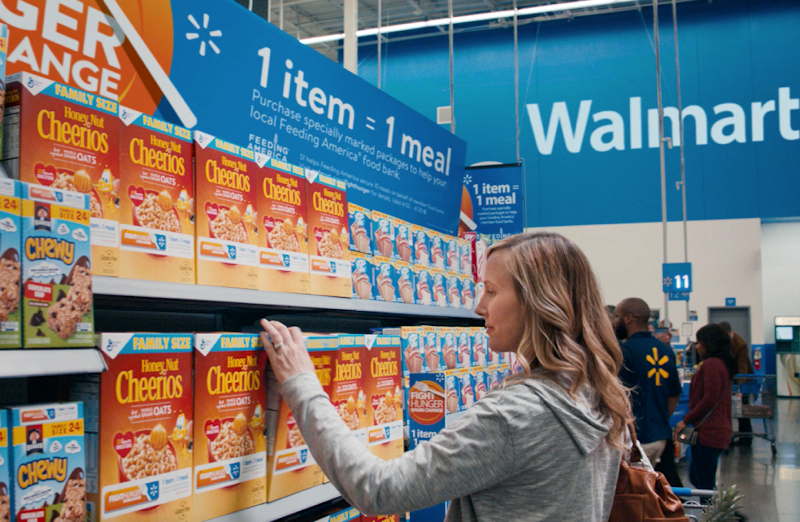 BOISE, ID – April 22, 2019–One in eight Americans in communities across the U.S. struggle with hunger, according to the U.S. Department of Agriculture, including 221,000 Idahoans. To raise awareness and combat the issue, Walmart, Sam’s Club, Feeding America® and The Idaho Foodbank are kicking off its sixth annual nationwide “Fight Hunger. Spark Change.” (FHSC) campaign, which will run from April 22 to May 20.

In partnership with The Idaho Foodbank, Walmart and Sam’s Club now invite Idaho shoppers to help fight hunger in their local community. There are three ways to participate – purchasing a participating item in-store or online, donating in-store or donating on Feeding America’s website.

With 749 million meals achieved over the last five years, Idaho customers and members can help the Feeding America network secure its 1 billion cumulative meals goal in three ways. They can track the number of meals by visiting www.walmart.com/fighthunger.

“The ‘Fight Hunger. Spark Change.’ campaign helps us feed thousands of Idahoans. For every one dollar donation, we can provide food for five meals. Last year the campaign donations provided 2,440,400 meals in Idaho. We are grateful to be included in this incredible nationwide effort to help feed our communities,” said Karen Vauk, president and CEO, The Idaho Foodbank.

“As we go into our sixth year of the ‘Fight Hunger. Spark Change.’ campaign, it’s exciting to approach the 1 billion mark in terms of charitable meals secured for Feeding America over the life of the program,” said Kathleen McLaughlin, chief sustainability officer for Walmart. “Food insecurity continues to affect communities across the United States. Working with Feeding America, our customers, members, associates and suppliers, Walmart and Sam’s Club aim to be part of the solution.”

Last year, The Idaho Foodbank benefited from $128,083 in contributions from ‘Fight Hunger. Spark Change.’  The Idaho Foodbank also received more than 1.5 million pounds of food from Walmart stores for distribution to hungry Idahoans.

To learn more about the campaign visit www.walmart.com/fighthunger.

Walmart Inc. (NYSE: WMT) helps people around the world save money and live better – anytime and anywhere – in retail stores, online, and through their mobile devices.  Each week, over 275 million customers and members visit our more than 11,300 stores under 58 banners in 27 countries and eCommerce websites.  With fiscal year 2019 revenue of $514.4 billion, Walmart employs over 2.2 million associates worldwide.  Walmart continues to be a leader in sustainability, corporate philanthropy and employment opportunity.  Additional information about Walmart can be found by visiting https://corporate.walmart.com, on Facebook at http://facebook.com/walmart and on Twitter at http://twitter.com/walmart.

Feeding America® is the largest hunger-relief organization in the United States. Through a network of 200 food banks and 60,000 food pantries and meal programs, we provide meals to more than 46 million people each year. Feeding America also supports programs that prevent food waste and improve food security among the people we serve; educates the public about the problem of hunger; and advocates for legislation that protects people from going hungry. Individuals, charities, businesses and government all have a role in ending hunger. Donate. Volunteer. Advocate. Educate. Together we can solve hunger. Visit www.feedingamerica.org, find us on Facebook or follow us on Twitter.

About The Idaho Foodbank

The Idaho Foodbank is an independent, donor-supported, nonprofit organization founded in 1984, and is the largest distributor of free food assistance in Idaho. From facilities in Boise, Lewiston and Pocatello, the Foodbank has distributed more than 170 million pounds of food in its 35-year history. In the last fiscal year, the Foodbank distributed enough food to provide more than 17.5 million meals to Idaho families. The Foodbank distributes food through a network of more than 400+ community-based partners. These include schools, pantries, senior centers, feeding sites and shelters. The Foodbank recognizes the connection between hunger and health and operates direct-service programs in the community that promote good nutrition and healthy living. Visit www.idahofoodbank.org for more information. Find us on Facebook and follow us on Twitter.