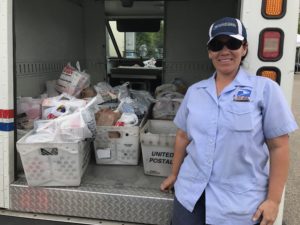 This is a news post from the 25th anniversary of Stamp Out Hunger in 2017. Read about this year’s event here.

One of Idaho’s longest-running community events was back in 2017 with a successful year, with more than 200,000 lbs. of food coming to Idahoans in need through the Stamp Out Hunger food drive on May 13. Organized by the National Association of Letters Carriers (NALC) and The National Rural Letter Carriers’ Association (NRLCA), the nation’s largest food drive was celebrating its 25th year, with a goal of collecting 185,000 pounds of food. The drive came at the perfect time, collecting shelf-stable food for distribution to the 232,000 Idahoans who are in need.

“Every day, letter carriers are on the ground in every neighborhood of our communities, so we see the struggles and recognize the need of our friends and neighbors who are food-insecure,” says Boise Stamp Out Hunger Coordinator Candace Lincoln. “Luckily, through this event for the last 25 years, we’ve been able to be witnesses to the incredible generosity and giving spirit which makes Stamp Out Hunger such a success.”

After meeting last year’s goal, Boise Postmaster Dan Corral, as well as other letter carriers in Boise, dyed their hair blue to help raise awareness for the event. Corral promises more of the same next year because of goals being exceeded this year.

“The energy and simplicity the letter carriers bring to this event each year are what makes Stamp Out Hunger such a success. The support and passion for this food 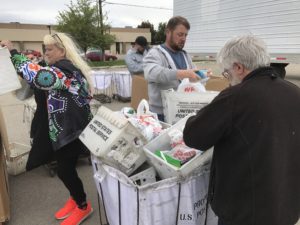 drive is contagious,” says Karen Vauk, President and CEO of The Idaho Foodbank. “These donations will come at the perfect time, when donations drop off during the warmer months. We thank our local letter carriers who continue to make this event such a tremendous success.”